Although its quite rare to see a rude or racist Japanese person, they exist, and if you try its not hard to find one.  By rude I usually mean anti-social behaviour which we see quite often in Canada and America.  By no means should it be strange, but in Japan, where everyone is usually polite, with the exception of no one ever holding open doors for some reason, its quite strange to see rudeness.  The earliest sign of rudeness i’ve seen is silence.  When you’re an asian, and you don’t know Japanese too well you tend to get the silent treatment, especially if you try to speak Japanese.  This happen when I bought my turtle, and I can’t help but feel there’s a bit of racism behind it, especially when they look at me with those eyes.  There are no other customers around in your shop, so what the heck, I’m giving you business, not stealing yer jobs.  Another small shop I went to a guy openly talked about how certain Asian’s are bad and how others are better.  And that Vietnam was a good country because they fought the Americans hard like the Japanese did, except he forgot the fact that Vietnam won.

Rudeness isn’t exclusive to foreigners.  I’ve seen this guy run out of a convenient shop to yell at parking enforcement agents.  The agents don’t bother to challenge the guy with the black Mercedes probably fearing retribution.  They run off quickly as the guy shouts slurs and angry words at them.  Another time was in Tokyo where a guy basically told a shopping staff not to talk to his daughter because they were promoting something or another.  It seems like an everyday thing in Canada, but here its just kinda odd to see. 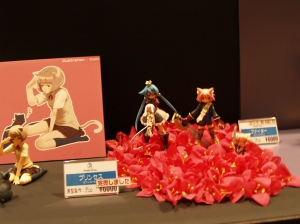 I’ve gotten a hold of the WonFest catalogue, which also acts as a ticket to get in to Wonfest!  Now lets hope I don’t forget to bring it or else I’ll be shelling out another 2000 yen!

Feel like having your own collection of Nendoroids?  How about all of them?  What’s the catch?  You only have to battle enemies in the form of Tower Defence, with the power of Saber and some weird little Nendoroid figures.  Then, when you win you earn coins, which you can use to purchase Nendoroids from the in game gashapon machine.  The collection, unfortunately, is only available on your Apple device, until you drop big bucks picking up the real stuff (which arebeautiful).  However, do not fret!  The app doesn’t just come with games, but galleries and descriptions of your favourite Nendroids, and if you have internet, you get updates on news from Good Smile Company!  If you have a camera, you can take 3D pictures with the Nendoroids.  So pick up the app on the Apple Store, what could you lose?
Link to Japanese Apple Store

After two days and many hours of grease, mistakes, and more grease, I’ve gotten to the point where I need new supplies to continue on.  I need to pick up the electronics that the car didn’t come with in order to fasten them to the rest of the car.  It’s been an enlightening experience, and in some ways it feels like working on a real car.  Except for the fact that real cars aren’t screwed on by a hundred fasteners, but a thousand or so fasteners.   After I finish the electronics, its onwards to the body!

Ministop has a Ika Musume Season 2 promotion going on right now!  If you buy two or more Ika Musume S2 supported item, you get a free fan!  A lot of items are already gone, and the fans are going too!  Better hurry because it actually started 2 days ago! Run in fear Ika-chan, the chips taste like Curry Squid from the bottom of the sea! 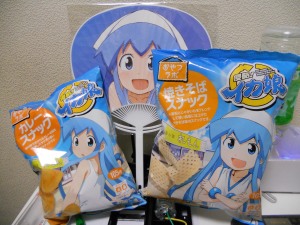 So begins my journey down the spiralling path of expensive models… However, $150 wasn’t too expensive! 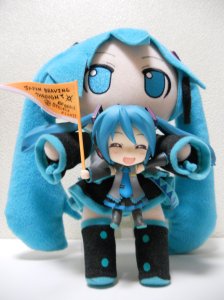 Good Smile Company has a little request, and the support deadline is in an hour!  I learned a little late, but cracked open the box as soon as I found out. Good Smile Company wants a picture of Miku, and a word of support for Japan! Yes, My Hatsune Miku Nendroid has arrived.  My first Nendroid.  It is posing with her bigger Gift Miku!  Not the best shot or best pose, but I didn’t have a lot of time!
She comes with a total of four faces, but I’ve decided to use the default one.  She also comes with a leek, a pair of pon pons and a flag accessory.  The flag also has a musical note add on.  For something so small it is certainly well built, and extremely detailed, especially compared to the puchi Nendroids.  I know understand why Nendroids are so popular and regret holding out this long!  I jumped on this one was because a friend was in the middle of ordering  one and he told me 1000 yen of the proceeds go to charity to support Japan and for 3000 yen, I couldn’t say no!
Good Smile Company Blog